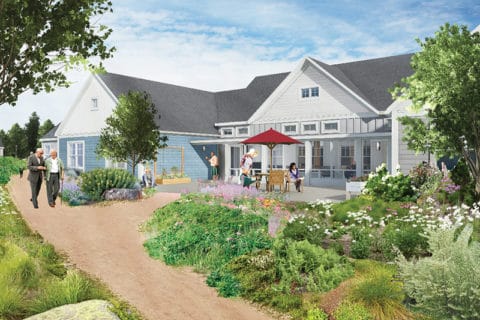 With little fanfare, a group of dedicated Islanders is close to breaking ground on a new kind of nursing home for the Vineyard.

In a place where even the most community-minded land use projects can be throttled by protests, lawsuits, and well poisonings, it’s sort of amazing that a proposal to build a long-term elder care complex off Edgartown–Vineyard Haven Road is quietly chugging along toward full approval.

Once fully funded and all regulatory boxes checked, elders needing nursing support or rehabilitation will have the option of communal living with private bedrooms and baths, shared living and dining space, a country kitchen, and a sense of independence. In other words, a place that provides licensed, skilled nursing, but contained in a setting that feels and looks more like home.

The five Green House homes, as they are known in the industry, offer a new model of elder care. The first Green House opened in 2003 in rural Mississippi, and there are now nearly 400 projects of its kind across the country.

According to Navigator Elder Homes of New England, the organization behind the effort that will ultimately become the nonprofit owner of the complex, each house will hold a maximum of fourteen elders. The five free-standing, single-story structures, just over 11,000 square feet each, will form a circle around an outdoor garden area and sit on nine acres, part of a larger twenty-six-acre parcel. Just as important in this day and age, the complex will also include three buildings for workforce housing.

“But wait,” you say, “I’m still mowing my lawn and playing tennis.” True that, but the eighty-five-and-older population is also growing. That cohort is estimated to reach 607 by 2030 and double again by 2050.

Cindy Trish, the executive director of Healthy Aging Martha’s Vineyard, believes those numbers most likely underestimate our future aging Island. “We’ve already exceeded most projections,” she says. “Older people here feel respected, and they feel it’s important to age here and to age in their homes if possible, and they look to their community to support them.”

If Navigator achieves its targeted goal of opening in late 2023, it will largely be thanks to three women who shared a vision, collaborated, brought others onboard, and never ceased advocating for a better way to care for our elders.

Paddy Moore of West Tisbury, the founder of what is now Healthy Aging MV, and Renee Lohman, the president and CEO of Navigator Elder Homes of New England, were initially introduced to one another through the Robert Wood Johnson Foundation, long a funder of Green House homes across the country.

As Lohman remembers it, “We were like two peas in a pod.” Moore, the longtime advocate for elders, was looking for a solution to replace Windemere Nursing & Rehabilitation Center, the aging and money-draining long-term nursing facility at the Martha’s Vineyard Hospital. Lohman, who previously founded a chain of urgent care centers, provided the business acumen and was drawn to a new, more integrated model after discovering there were few options that didn’t scream institutional.

Enter Denise Schepici, the president and CEO of Martha’s Vineyard Hospital, who inherited the predicament of Windemere, the twenty-seven-year-old facility based on a tired and unsustainable model of institutional nursing home care. There, elder residents sometimes share a room and one bathroom with three others. Retractable curtains provide the sole semblance of privacy, if you can call it that. As she says, “We couldn’t even build a
facility like Windemere today.”

With the hospital sustaining significant losses every year on Windemere, the board nonetheless remained committed to keeping the doors open until a solution could be found. And so the long journey to create another alternative began to take root. The hospital recently closed on the twenty-six-acre property for $3.6 million, following unanimous approval by Edgartown voters this spring to allow the complex to be built outside of existing zoning bylaws.

There are still significant wastewater issues to be resolved to the satisfaction of the Edgartown Wastewater Commission and the state Department of Environmental Protection. And then the project must still go before the Edgartown Planning Board, which will almost certainly forward it onto the Martha’s Vineyard Commission for review. If all goes as Lohman hopes, the commission will review the project some time in October.

There is also, of course, the little matter of paying for the approximately $43 million project. (Licensed nursing facilities don’t come cheap.) The vast majority of the money, nearly $37 million, will come through low-cost forty-year rural development loans from the USDA. But those loans are contingent on organizers raising or getting pledges for the remaining cost. The board of directors is busy, but confident.

If those hurdles can be cleared, the Green House project will cater not just to the wealthy aging population. At least half the beds will be reserved for Medicaid and Medicare patients, and all remaining Windemere residents will have a room if they choose to transfer there.

“What I love about the Green House concept is that it’s closely tied to your real home,” says Lohman of Navigator. “For example, would you have a big medicine cart rolling down the hallway? No, you’d have your medicine in your medicine
cabinet that’s locked up.

“There are just lots of simple solutions that have been thoughtfully planned, such as not having a set time when you wake up or have breakfast,” she added. “Maybe you want to go the kitchen and, with some help, make your own. It’s really about what do you love most to do, whether that’s gardening or maybe making art or having a pet, which is encouraged.

If you think about all the aspects of a real home, that’s all part of the Green House concept.”

Adds Schepici: “I hold my breath every day that we get to the finish line. The Island needs this and needs it now.”