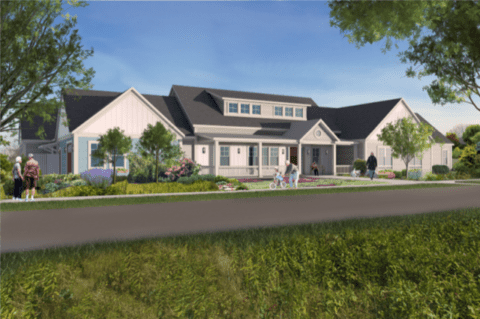 Martha’s Vineyard Hospital wants to solve a space crunch at the main hospital, expand and improve its nursing home service, and add workforce housing to support that service, and it hopes to address all three concerns with one new project. Not all neighbors of the new facility are onboard, however, and environmental hurdles remain, as well.

A hospital proposal to replace its Windemere nursing facility and provide housing for Island healthcare workers was in front of the Martha’s Vineyard Commission for a public hearing on Thursday night.

The proposal is to build 48 workforce housing units and 66 nursing home units on roughly 28 acres at 490 Edgartown-Vineyard Haven Road. The project calls for 12 buildings to be constructed in a campus style with a total floor area of about 37,000 square feet. The hospital is joining forces on the project with Navigator Homes, an organization focused on elder care services, which will operate the nursing home facilities. The workforce housing will be divided between hospital and Navigator staff.

Future plans for the building that houses Windemere will be folded into a broader master plan to expand the hospital, Ms. Schepici said.

“We have some room for expansion, [but] we can’t do that until Windemere is vacated,” Ms. Schepici said.

Construction will be done in phases, starting with the nursing facilities. The goal is to break ground in the beginning of 2023 and open in August 2024. Each of the current 28 residents at Windemere will be invited to continue their care in the new facilities. The nursing facilities will be constructed in the so-called green house model, touted as a quality-of-life-centered approach to elder care.

“Its core values are making sure that this is a real home, not in an institutional setting, providing seniors with a meaningful life to enhance elder well being and empowering the staff to provide family-like hands-on care,” David McDonough, the president of Navigator Homes, said of the model.

The project has faced an ongoing wastewater problem. The town sewer does not have the capacity to accommodate the project, so a series of on-site denitrifying septic systems have been proposed. The project is expected to generate roughly 115 kilograms of nitrogen per year over the allowable limit for a project of its scale. The denitrifying systems have not yet been approved by the Edgartown board of health and the applicant will need to present a nitrogen mitigation plan to the commission.

Roughly 18 acres of the property have been designated as priority habitat by the National Heritage and Endangered Species program due to the presence of the imperial moth species. Some of the buildings were reconfigured to reduce the impact on the moth habitat and the project is awaiting formal approval by the NHESP.

A group of abutters on Teaberry Lane have repeatedly objected to the project both in writing and public testimony. They’ve said the project is too dense, would have negative environmental impacts and would have a marked increase in traffic along Edgartown-Vineyard Haven Road.

“Martha’s Vineyard has not seen a development of this scale, to my knowledge, in quite a few decades,” Patricia Turken, one of the abutters, said. “We just ask for some relief on the scale and density and maybe to restructure.”

The project is permissible due to a recent amendment to the Edgartown zoning bylaws that allows the local planning board to give special permits for senior residential developments.

“This is straight up workforce housing and elderly services…The bylaw is very specific on what can be proposed, and that’s what we’re proposing,” Geoghan Coogan, the lawyer representing the applicant, said.

The public hearing was continued to September.

Courtesy of the Vineyard Gazette