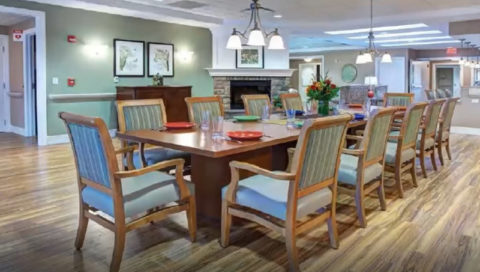 The Dukes County Commission heard updates from representatives of Navigator Homes’ Green House Project on Wednesday — the planned replacement for Windermere Nursing and Rehabilitation Center, before unanimously approving a letter of support for the project.

The Martha’s Vineyard Hospital will be handing off its licenses and permits — currently held for associated Windermere — to Navigator Homes. Navigator Homes board member Melinda Loberg said that the regional project aims to bring  “a new model of skilled nursing care to the Vineyard.”

“We need to be thinking about our seniors,” said Navigator Homes President and CEO David McDonough, “they’ve done everything to make this Island what it is.” Particularly because the Island’s older adult population is increasing; currently, 1 of 3 Island residents are aged 65 and up, stats that exceed the national average of 1 of 5. Therefore, said McDonough, “the healthcare needs of seniors will continue to increase over time.”

McDonough noted that a key goal for the project is ensuring housing. “If there’s no skilled nursing facility,” he said,  “and if our seniors have to be shipped off Island to take care of their needs, it’s empirically established that they will die in a much shorter period of time — on average, a year and a half.”

McDonough highlighted the importance of securing housing for the staff as well as the seniors. “Part of the ecosystem for taking care of people is having staff,” he said. As the housing crisis is worsening and affecting hospital workers and senior care nurses, McDonough said offering housing to the staff assures continuity. Establishing long term relationships among staff and seniors is part of what makes for a successful facility, he said.

The “anti-institutional” Edgartown Green House project, constructed to emulate “real homes” will consist of 76 housing units, 30 of which will be dedicated to staff.

The commission heard an update on Eastville Beach from County Manager Martina Thornton, who said efforts have already been made to clean up the area, and to prevent misuse. Thornton said that the county recently received a letter from the Convery family, thanking them for taking action. Thornton said she has reached out to the Land Bank, along with other Island agencies, in hopes of opening up the area further, and possibly creating a park. Commission Chair Christine Todd agreed, and advocated for collaboration among various Island committees in order to better manage the area.

Per its building committee recommendation, the county approved in a unanimous vote to allocate up to $20,000 from the capital improvement fund for an assessment by an architect concerning plans to update the county-owned Vineyard Health Care Access Building.

Thornton said the goal is to hire an architect that can propose a design that takes into account the current state of the building, and to inform the commission of “the minimum required improvements to meet the needs of the program.”

Commissioner Tristan Israel said it would be worth considering a proposal that not just meets the minimum requirements, but thinking more long term.

“There should be a time where we as commissioners, [and] as an Island, consider how we deliver social services to our constituents, and what the capital needs are in order to make that happen,” said commissioner Peter Wharton, “on behalf of the towns.”

On the county’s various properties that provide services to Islanders, Wharton said, “how we deliver those services in a cohesive, efficient, beneficial and cost effective way,” should be addressed with an adequate capital plan. “[So] we’re not piecemealing and Band-aiding solutions, constantly, going forward.”

Commissioner Don Leopold said, “From a process standpoint, I’d like to suggest that we think about how we proactively pay attention, more than I think we do,” with respect to county commissioner roles. Leopold noted that it would be pertinent to engage with and support town officials in addition to the county’s “legislatively required functions.”

“The Island would benefit from us having a strategic plan,” said Todd. “That incorporates all of the services that the county provides.” Todd questioned if the allotted $20,000 would be sufficient for the task at hand. Although the immediate issue regarding the building update is important — the building is currently in dire need of a functioning heating system, among other problems — Todd said she would like to see a more comprehensive plan that “isn’t just reacting to problems when they come up, but planning for a better future.”

Todd suggested discussing forming a subcommittee in the future to address longer-term plans.

“This is a way to make it better than it has been,” said Todd upon the vote, “may this be the first step of many that we take to improve this facility.”

The commission was provided a brief update regarding the American Rescue Plan Act 2021 (ARPA), by Wharton, who stated that current discussions with recipient representatives regarding grant terms and conditions have led to “more than we were comfortable with” — questions over answers. Wharton said the working group designated to address how to distribute the funds has been in contact with other Massachusetts counties in order to better manage the process. “We want to make sure that we get it correct,” he said.

Todd highlighted the need to be “very secure in the process moving forward with the applications we receive and ultimately award funds to.”

Thornton said that not all expected applications have been received by the county, and no funds have yet to be distributed.

The commission ultimately voted to employ an attorney to help the county “across the finish line,” with fund management and distribution.

During her manager’s report, Thornton addressed her contract with the county, and requested an interim vote to extend her previous contract which has expired while the new contract has been in revision. “Right now I don’t have a legal document that would authorize the treasurer to pay me,” she said.

Todd agreed on a vote to formally extend the contract with the understanding the new contract will consist of an increased salary, which was then unanimously agreed upon by the commission.

Courtesy of the MV Times